As mentioned in Danny’s previous blog we are pleased to announce that we are brewing our Decade Amber Ale, celebrating ten years of Panther brewing. When we launched it in March it got a little bit lost with certain worldwide events, and so we thought we would brew our tenth anniversary beer again, but this time with a little twist!

We decided to brew the ale with just UK ingredients this time.  It is still brewed to 4.2% using malted Norfolk barley (from our friends at Crisp Maltings and the barley grown at Salle Farms Co) and has a rich amber colour.  Why all UK ingredients?  Well at this present time, it seems sensible for all of us to become more conscious of the environmental impact our actions contribute and buying hops now from around the world seems difficult to justify.

I guess you may ask why in the past we sourced our hops not just from the UK?  Unfortunately, UK hops did not give the flavours we have become to expect and enjoy for Pale / Amber ales that we purchase today.  I know our customers will be surprised that most bestselling beers from macro to microbreweries use non-UK hops.

However, our friends at Charles Faram have come to the UK farmers rescue and in 2007 started a hop breeding programme to ultimately match or provide a twist using the UK “Terroir” factor, the more vibrant flavours that come from “New” hops farmed throughout the world.

To achieve our aim to use exciting UK hops we contacted Charles Faram and they came up with two new experimental UK grown hops for us to try.  They recommended CF 169 -so new that it does not have a name (although going to press I see it being called Mozart in the literature now) and Olicana.

A few other breweries have been given these experimental hops and they have indicated that the Olicana hop has floral, mango and passionfruit aroma and flavour in the beer.  CF169 has been described as crisp, floral, grape, berry aromas and soft minerality. All of these flavour descriptors are usually associated with wine!

CF169 was supplied to us in the cone format and so we decided to use it in the boil.  We added this hop at various times during the boil to give us the clean bitterness but also to retain some of the flavour characteristics of the hop.  Olicana was supplied as pellets.  The pellet format lends itself to dry hopping so we put as much as we dared in the fermenting ale.  The pellets consist of small fragments of the hops and when added to the beer they break up.  This allows for a greater surface area (much more than cones) which is great for improving the flavour extraction from the hops.

Here are some pictures of the hops used in Decade, kindly given to us by Charles Faram.

Please note that the aim of the breeding programme is not only giving us brewers the flavours that we are looking for but by selection they hope the vines are more resilient to pests and diseases.  The farmers are conscious of their environment and would like to reduce or eliminate the pesticides and chemicals they currently have to use. 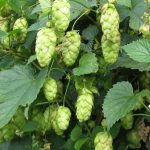 Olicana hops on the vine in a secret UK location. 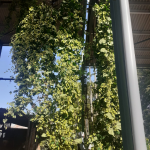 CF169 at the packing machine

When we brewed Decade previously, we limited the brew to casks but I am pleased to announce that there will also be 500ml bottles of Decade available for you to savour in the comfort of your own home!  Tell us what you think of the beer and we will  use your flavour description in our tasting notes!

Finally, we would like to thank Jon Stringer and all the team at Charles Faram in helping us brew our Anniversary beer Decade.