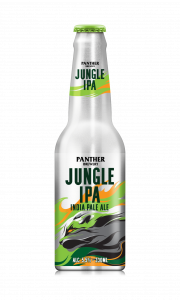 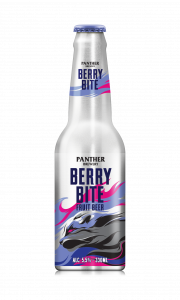 We have been busy developing some new craft ale at Panther HQ since the start of the New Year. We started looking into it when it became clear that our current Real ale in glass bottles were not suitable for all occasions.  Some customers would like to sell our beer but have a no glass policy due to safety concerns. We looked into several different alternatives and decided that aluminium bottles were exactly what we wanted. While aluminium bottles have been used by some of the big lager producers before as far as we are aware there is little to no usage for real ale.  Eventually we found a supplier and the ground-breaking product was born. The bottles have some unexpected additional benefits of being light weight, UV light resistance and looked and felt great.

We really wanted to make them stand out so our Panther design team went to work on getting a label which was fun, dynamic, colourful and striking. It came out better than we could have hoped and everyone who has seen the bottles has been blown away with how well it looks and tastes.

Our current craft range comes in two styles of ale.  Jungle IPA is a hazy straw-coloured ale packed full of Juicy American hops. The low bitterness makes way for a powerful explosion of tropical fruit aromas. Berry Bite is a fruit beer and is a slightly pink hazy beer crammed full of sweet Berry flavour and aromas.  Both styles of craft ale are best served chilled and can be drunk straight from the aluminium bottle!

The bottles are being released into the wild this week so keep an eye out for them in your local Panther suppliers. Don’t forget the best place to find any of our bottles is direct from the brewer shop.

Additionally, those of you who are eagle eyed might see “Panther Country” signs in local fields of Barley.  Local businesses Salle Farms Company and Crisp Malting Group have got together to grow local barley and malt for Panther Brewery. You might even see the mysterious Panther lurking in the shadows. Send the brewery any pictures of Panther sightings while out and about and the best picture will win some samples of our new craft range!