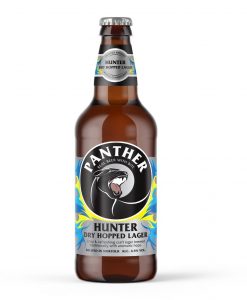 The Panther brewery team has been itching to brew another “Real Beer with Bite”.  Many of our customers have asked us for a locally brewed lager, explained Martin James, and so HUNTER Dry Hopped Lager was born in December.

We did not want to compromise on flavour and have brewed Hunter Lager with locally grown ingredients.  This includes locally grown Flagon barley, grown by Salle Farms Company and malted by Crisp Maltings at Great Ryburgh.  We hope that local hotels, pubs and retail shops will continue to support our locally brewed beer which in turn will benefit the local economy.

As a craft brewery we wanted to brew the beer traditionally and have used a classic German lager yeast, as well as the German “lagering” process, which involves conditioning the lager for a minimum of one month at cold temperatures (12C or less).

Martin explains that the “lagering” process gives lager its characteristic flavour.  Our Hunter will be similar to our “Real Ale with Bite”, where the yeast is key in conditioning the beer in a bottle or cask.  It is generally accepted that the longer the length of time the yeast is contact with the beer, the better the flavour.

While this may cause a dilemma for commercial lager brewers, who like to produce a high volume in the shortest possible time, we brew in small batches and are prepared to wait!

We believe that having used great flavoured local ingredients, and having taken the time to condition it properly, it would not be sensible to filter and pasteurise the lager, as this would risk removing desirable flavours.  Hunter Lager has a crisp and refreshing flavour and a hint of juicy aromatic hops. It tastes great with spicy foods, as its crisp fruity flavour enhances the spices and keeps you refreshed.

Hunter is suitable for Vegans, and is best served chilled and poured carefully.