The Craft Beer Era And The Role Of Mild

Traditionally a Mild ale would be enjoyed by many after a long day at work, and with a modest abv between 3 – 4% we can understand the appeal. Picture the scene – you’ve slogged through a physically hard activity, you meet with friends at a pub with a homely feel and enjoy a couple of pints of Mild with a ploughman’s, and just simply relax. The things the UK beer scene used to be made of and should be celebrated as much as today’s.

But hey, doesn’t sound very modern? Where are my punchy dry hop aromas and challenging flavours? But that’s the beauty of a traditional Mild – light or dark. Many times have I enjoyed a Banks or Bathams Mild with a smile on my face for the simplicity of what it is. We love producing hop forward beers utilising the latest aroma hop varieties, and equally enjoy looking back at the heritage of British beer and reproducing classical styles for cask ale. With many of the full flavoured punchy craft beers on the scene with often a high abv to back the flavours up, we relish the challenge of producing a low abv beer that can pack flavour and still remain quaffable and refreshing. We have in the past produced a low abv Mild, but for 2017 we are creating a new recipe to reflect the changing palate of the modern beer drinker. Showing that the, now almost extinct Mild, can be pushed into 2017. 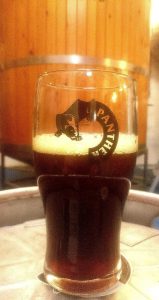 As many of the locals to Norfolk and hopefully some further afield will know, the annual City Of Ale festival is hosted at great pubs around Norwich from the 25th of May until June the 4th. Celebrating the fine pubs that the city has to offer, along with the great local ales of Norfolk. Each year we have produced a special edition ale to coincide with the festival, and this year we have chosen to go back to basics and produce a traditional 3.3% Mild to tie in with CAMRA’s Mild May. This year’s Mild will be a Ruby Mild and is complex in the grist along with traditional English hops, Fuggles and Challenger mixed with a late addition of Mosaic. All backed up with a traditional English ale yeast for some fruity over tones.

Our Mild will be launching on the 25th of May to coincide with the Norwich’s City Of Ale launch party, along with all good pubs across Norwich and North Norfolk thereafter. As well as a limited 500ml bottle release which available from us directly at our regular markets and brewery shop. When it’s gone it’s gone!